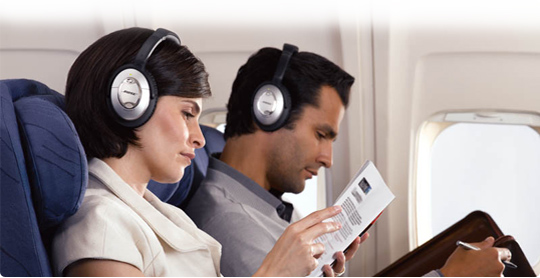 Most people have experienced discomfort in their ears when flying. There may be many reasons for such discomfort, although the most common is a pressure change in the middle and outer ear.

This article discusses a few issues that can cause discomfort in the ears as well as effect hearing when flying. In addition, it contains suggestions on how to lessen such discomfort and how to protect hearing.

Many describe the ear discomfort as a plugged ears or blockage, a feeling that can cause severe discomfort. Such symptoms are most commonly experienced during take-off and landing, as the pressure changes in the passenger cabin can be considerable and rapid due to changes in flight altitude. It is possible to avoid such discomfort and protect yourself from the effects of pressure changes in a number of ways. One way is to keep the Eustachian tube (auditory tube) open by chewing gum during take-off and landing. Having blocked ears is seldom harmful but can cause great discomfort. Noise during flight, however, can have detrimental effects and may cause loss of hearing. If seated at the rear of the aircraft, the decibel level can exceed 85 dB – and can even reach 100 dB. The location of the seat and proximity to the motors of the aircraft has an effect on this. According to guidelines issued by the Administration of Occupational Safety and Health in Iceland, the maximum stay in a space where the noise level is 88 dB is four hours. As a result, it is a good idea to take precautions on longer routes.

Studies have also shown that flying is high on the list with regard to anxiety for people with underlying hearing problem or tinnitus. Such anxiety is in most cases unnecessary and is based on general experiences of discomfort in the ears when flying.

Although passenger aircraft fly at altitudes of over 30,000 feet (9.1 km), the air pressure in the passenger cabin is regulated automatically so that the pressure rarely exceeds 6,500 feet (2 km). These pressure changes have the greatest impact on the middle ear, the part of the ear that is behind the tympanic membrane and contains the small ear bones. The purpose of the small ear bones is to transfer sound waves to the inner ear which then changes them into electrical pulses that are transmitted to the brain. Under normal circumstances, the air pressure in the middle ear is the same as that of the environment. The air in the middle ear is continuously being renewed, as the Eustachian tube that links the pharynx and the middle ear opens and closes every time that we swallow or yawn and thereby allows air to flow into the middle ear.

The function of the Eustachian tube can vary considerably from person to person and may even vary in a single individual at different times. Here are some things you should keep in mind:

The great majority of people who suffer from tinnitus have normal inner ear function. The middle ear function is also usually normal. This can be measured by a doctor or an audiologist and will only take a short while. If a person with tinnitus experiences blocking of the Eustachian tube in connection with flying, the person in question may feel that the tinnitus becomes temporarily stronger, in the same manner as when using ear plugs. By “clearing” the ears by blowing as described earlier, the tinnitus generally returns to its former strength. In some cases, pressure changes have an effect on tinnitus. Such changes can have an effect on its frequency and also temporary effects on the strength of the sound, which can both increase or decrease. Only a small proportion of persons with tinnitus experience these effects, and when they do happen, they are temporary.

On occasion, there can be a sudden decrease in pressure in the passenger cabin. This can have an effect on the inner ear. It is very rare but can cause hearing and balance problems. If the discomfort experienced in the ear in connection with a flight has not disappeared after a few hours, contacting a doctor or expert is recommended. Treatment is usually successful.

A tube is often inserted into the tympanic membrane as part of the treatment for disruptions in middle ear’s function. In addition, injuries and infections can cause a hole to form in the tympanic membrane. In both cases, there is in fact less likelihood of ear discomfort than if the membrane were intact. This is because the pressure changes equalise automatically through the membrane and the person is not dependent on the normal function of the Eustachian tube.

Some who are sensitive to any form of pressure changes feel that the use of ear plugs lessens the effect. Special flight plugs are available and can be obtained from pharmacies or on-board aircraft. They can mitigate the effects of sudden pressure changes that may cause discomfort.

Many find the noise in the passenger cabin considerable, especially if seated toward the rear of the aircraft. Patients with hearing ailments or tinnitus are often more sensitive and even experience considerable discomfort. Ear plugs to protect the ears can be extremely useful in such circumstances. Some people who suffer from tinnitus feel as though they are free of it because the noise from the aircraft masks the tinnitus.

Those who have recently undergone a procedure in the middle ear or are about to undergo such a procedure need to consult with a doctor before embarking on a flight. If the procedure involves putting tube in the tympanic membrane, there should not be any obstacles to flying. Other procedures that either involve repairs to the tympanic membrane or procedures such as stapedectomy for otosclerosis usually require the patient to avoid flying for a certain length of time. It is important to consult with a doctor or an expert in such cases.

Persons with hearing ailments, particularly those suffering from tinnitus, can suffer from anxiety or depression. Sometimes the very thought of a long flight can cause such great anxiety that they find it difficult to think about embarking on such a journey. Persons who experience such anxiety should discuss the matter with a doctor, as he may be able to prescribe a mild sedative to make the journey easier.

Although many are familiar with the feeling of experiencing discomfort in the ears and/or effects on hearing in connection with flying, it is considered the exception and not the norm that they are of such a nature as to prevent or limit flying as a mode of transport.